In 1940 after the defeat of the British Expeditionary force in Europe and its desperate withdrawal at Dunkirk, Churchill told his Chiefs of Staff that “enterprises must be prepared, with specially-trained troops of the hunter class, who can develop a reign of terror down these coasts, first of all on the “butcher and bolt” policy”. One of the outcomes of this was Operation Claymore in 1941 where newly formed Commando groups attacked the Norwegian Lofoten Islands. It was hailed as a success as the commandos destroyed fish-oil factories, petrol dumps, and 11 ships while capturing 216 Germans.

However, in the confusion a five-man team sent slightly further inland to attack a small outpost, were lost. Official reports have them down as missing presumed dead.

Now almost one year on in 1942, under pressure from relatives the War Ministry is sending in officers from the Special Operations Executive (SOE) to find out what happened to these missing men.

As a SOE Agent, you come from all walks of life. You’ve been selected and trained to work behind enemy lines. Currently, your commanding officer is Col. George Quietly, who has a reputation of tidying up other people’s messes. An old school Military Intelligence Officer, who is not fired up by Churchill’s words, his operations are carefully planned and executed, and his staff never go in all guns blazing. The rest of the service has nicknamed the people who work for George as “Quietlys” whose motto in Latin is “Quiete et molliter” or “Quietly and Gently”.

This is a game for Call of Cthulhu 7th Edition, set during the 2nd World War, for up to four players. No knowledge of the game system, Cthulhu Mythos or the historical setting required. Given that it’s an investigative horror game, maturity is required. 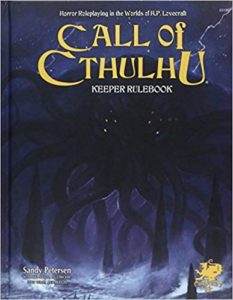