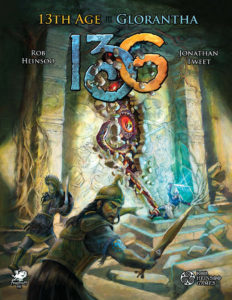 Its Sea Season at the Silverwind Stead in the land of Dragon Pass. It should be all dancing and alecakes, at this time of growth and renewal.

But outside the clan’s lands, the Tula, the forces of Chaos rages unchecked, taking all the clan’s effort to hold them back. Recently three of your clan’s greatest heroes Garmast the Windlord and his wife Vestala the Gentle, and the clan’s sage Ranulf the Beady went to perform a hero quest in a sacred yet secret place in an attempt to raise magical healing energies. It was not successful. Both Garmast and Ranulf was struck dead by an evil spirit which also drove Vestala mad. Fortunately, she has recovered her sanity, but a great famine has gripped the land, and now the clan is starving.  To make matters worse bandits made up of the routed enemy Lunar forces,  raid trade caravans loaded with emergency food from neighbours.

13th Age Glorantha is a fantasy D20 system written by two of D&D previous designers (3rd edition’s Jonathan Tweet and 4th Edition’s Rob Henisloo) set in Greg Stafford’s bronze age mythic world of Glorantha.  No experience of Glorantha or 13th Age required. This adventure is designed as a straightforward introduction to both setting and system.