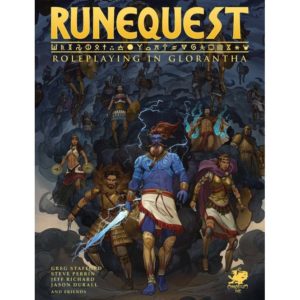 You can just leave him there in the dust and let the vultures eat his corpse (or maybe not, perhaps even Vultures have taste). Now your unit from Lunar Tarsh, survivors of the fall of Pavis, can make a run for home. The problem is that your group is known as Baldrox’s Bastards amongst the locals, home is hundreds of miles away across enemy territory, and supplies and morale are running low. Your only hope is to make it through the desert from the hole you are currently hiding in. Avoid the Beast Riders who are hunting you. Pray you don’t stumble across any foul chaos monsters. Then you might be able to find the testing ground that Sorcerers of the Imperial College of Magic set up in the Wastes. Perhaps they have a Moon Boat which you can sail all the way home?

So chin up solider. The Red Moon Will Rise Again!

This is a game using the new RuneQuest Glorantha rules. No familiarity is needed with either the setting or the rules (although if you are familiar with Call of Cthulhu you are halfway there). Be aware you are playing the villains of the default set up, in a game that riffs of the tropes of spaghetti westerns and more gritty World War 2 movies (such as Cross of Iron/Das Boot/Stalingrad).