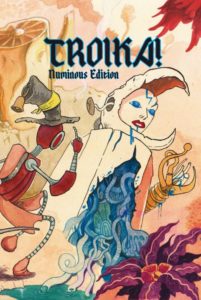 A chance encounter with a strange noblewoman leads you to the purple deserts of Serimit and a mission to rescue a sorcerer who holds secrets to save a drowning world.

Troika is a game of science fantasy using the Advanced Fighting Fantasy system. Travel the spheres in golden mirror-sailed barges playing character classes such as Vengeful Child, Poorly Made Dwarf, Sorcerer of the Academy of Doors, Lonesome Monarch.