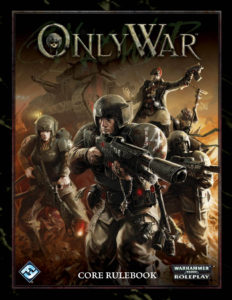 TO: Office of the Piyotri Planetary Governor

Thought for the day: Only in death does duty end.

The Undoing is a horror game set in the Warhammer 40k Universe. Players will take control of the members of a doomed squad of Penal Troopers – criminals under a suspended death sentence, used as shock troops and cannon fodder – as they descend into the grimdark wilds to face an existential threat beyond their understanding.

It is not a question of how they will die, rather, whether you can make your deaths count for something.

As a horror game, this session will explore many of the unpleasant elements of the 40k universe – specifically Supernatural, Body and Psychological horror, together with a fair bit of Gore. Please get in touch if you want to check whether this game will be right for you.