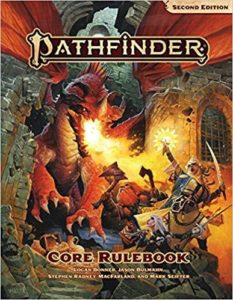 GM: Guy Milner
The village of Rosecrown has always had it tough, nestled in the foothills and isolated from civilisation apart from the Rose Road through the hilly High Forest…. but it has always been able to deal with the bandit attacks around its borders. Recently, though, the attacks have grown in intensity, and they have sent word to look for stout adventurers to help their stretched militia to deal with the problem. But is it all it seems?
This is a 1st level PF2 adventure.  A straightforward introduction to a tactical system that does interesting things with an action economy and makes the most of gridded combat. No previous experience needed!

It’s a windy Autumn’s evening at no. 4 Tandle Hill Road in Oldham. Dark clouds loom over the house and you won’t be surprised if rains all through the night and into the next day.

Earlier it was bright sunshine, and you left the patio door open for the guys from Magic Mark’s Carpets to get the new carpet for the upstairs bedroom into the house. So when the winds started up they blew in not only leaves but an uninvited guest. There’s a scruffy tramp sat on the sofa with twigs and leaves in his big bushy beard and wild brown hair. He’s saying he’s can’t remember where he left “a very important thing”. It’s somewhere in the park at the end of the road. He wounded it, put it somewhere safe and then went and had a drink at the Halfway House Inn. It’s all a bit awkward and in the pause, he asks you “have you got any Strongbow?”

Liminal is an ENnie-nominated tabletop roleplaying game of modern day British fantasy, where the Hidden World and mundane world collide. In this game you play the Liminals of the title, you might be a magician, a werewolf, an occult investigator, or even a Dhampir stuck between the mortal and vampire state.

Remembrance is a sequel of sorts to A Walk in the Park that ran at last June’s Go Play. However, you need not have played in that adventure to take part in this standalone adventure.